UK broadband customers hit with âloyalty penaltyâ of up to Â£220, survey shows 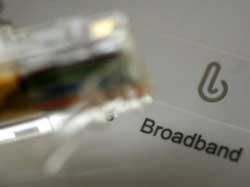 Broadband customers who stay with the same provider and do not haggle for a better deals are being hit with âloyalty penaltiesâ of up to Â£220 a year, a consumer group has warned.

Which? found that in some cases consumers would be better taking up a new superfast broadband contract rather than staying loyal to their provider without haggling as it would work out cheaper over the course of a year.

BT customers are at risk of paying the biggest loyalty premium â Â£220 â of the eight major providers, the watchdog said.

The average annual broadband bill paid by a loyal BT customer is Â£540 a year compared to Â£372 for those customers who haggled â Â£160 more than the providerâs cheapest fibre deal for a superfast connections, its survey suggests.

But new customers who take up a contract for standard broadband with BT now will pay just under Â£320 a year until their contract is up, usually at least 18 months.

Long-time customers were paying Â£540 on average but those who negotiated a better deal saved an average of Â£156.

TalkTalkâs new customers paid about Â£85 less than loyal customers, while Plusnet customers who haggled were paying Â£48 less on average than those who did not at Â£252.

Alex Neill, Which? managing director of home products and services, said: âBroadband customers will be appalled that not only could they be paying through the nose simply for being loyal to their provider but that they could, in some cases, also get a much faster internet connection for a fraction of the price that they are currently paying.

âIf you are willing to negotiate and happy with your current service, haggling might get you a good discount, but researching the deals available and switching is the best way to ensure youâre on a good value tariff.â

Which? surveyed 3,131 members about their standalone broadband in October 2018.